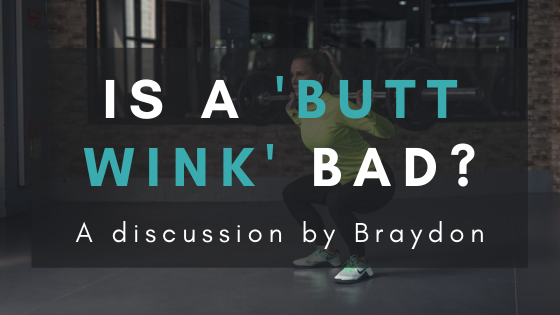 An Intro to the Butt Wink

Lumbar positions, particularly around the butt wink, is an extremely complex and controversial topic where many people fall on either side of the fence. The term ‘butt winking’ is frequently used to describe the ‘dip’ movement of lumbar flexion in the bottom of a squat.

Over the past decade, the consensus was that any lumbar flexion or movement outside of maintaining a neutral spine would significantly increase the risk of a back injury to the point where the injury was only inevitable. This line of thinking is mostly associated with squat and deadlift exercises. However, it has also been applied to other exercises.

The truth is there is little research to support neutral spine positions when lifting. That statement seems harsh, and that’s because it is, I feel there is always more to anything than a simple blanket statement. It would be naïve to think it is as simple as that. Injury research falls victim to issues like the need for large sample sizes and long periods of observation, making it difficult to draw conclusive findings. Compared to physics, it’s an imprecise science.

My Opinion on Injury Risk

My take on the current literature is that ‘butt winking’ is not inherently bad but is still a risk factor for injury.  In my eyes, it’s not the butt wink itself that is the problem but the additional moving lumbar joints within the exercise.  Squats already include active movement at joints including, ankles, knees and hips.  Because of the large volume of movement, it can be quite challenging to execute the movement consistently; that’s where I think the butt winking becomes a risk factor.

If you consistently butt wink, you repetitively place your lumbar spine in various positions of flexion and extension, exposing it to varying amounts of shear force. If that degree of flexion/extension varies from rep to rep then how can you become conditioned to that movement? Most injuries occur from “doing too much too soon, after too little for too long”. Essentially this means most injuries happen when performing actions you outside of your conditioned ability.

I believe that a neutral lumbar spine is much easier to coach as it is much easier to visually see (if you’re the coach) and feel (if you’re the athlete). That’s where we can minimise the risk of injury. Of course, if you’re an experienced athlete or coach with high self-awareness and lifting experience, you may be able to squat with a rounded or extended lumbar spine and still mitigate injury risk.

Another thing to think about outside of injury risk is torque. A butt wink may decrease the amount of tension aka torque the hips can produce, thus limiting the force output of the muscular structure that articulates with the hip bones.

You may find that 'fixing' or finding a way to minimise the butt wink may be a good strategy to improve your squat strength.

With these things in mind, I have left you with a very grey ‘it depends’ answer because as usual, it does depend on the context. Take the information I’ve presented today and use to figure out if you think this may be an issue that is worth correcting.

Do you Butt Wink? - ⭐ starring @helenawillixms ⭐ The butt wink is a very interesting topic with varying opinions. I've given my take on butt winking in more detail via a blog post on my website (link in bio). -- In a nutshell here's what you need to know about my thoughts on the topic: -- ▪️A butt wink is the rounding of the low back in the bottom of the squat ▪️ People often exaggerate this movement if they lack mobility in the legs or stability in the hips and or core region ▪️ It is neither good or bad, although one could argue it would increase injury risk to the low back ▪️ 'Fixing' a butt wink could improve torque and therefore strength and force production -- As usual this topic is complex. Feel free to weigh in or DM your thoughts 👐